Architecture Down Under: 10 Modern Designs Across Australia

Australian architecture is as diverse as the continent itself. While some design trends have remained consistent with Western advancements and ideas, the built environment has evolved around local climate, landscape and culture. From indigenous semi-permanent structures and colonial British influences to the Queenslander and Federation styles, the country’s architecture is markedly multicultural. Spatially diverse, these projects showcase how designers are rethinking vernacular forms through modern approaches.

Looking beyond work like the iconic Sydney Opera House, the following projects showcase contemporary architecture across Australia. Today, Australian practices are embracing global design cultures and new building trends. From humanist approaches embracing minimalism, to environmental designs aiming for performance, the projects reflect a diversity of ideas. These designs capitalize on the climate and embrace the surrounding landscape. The Mawson Institute was designed to provide a base for widely differing research and to promote informal exchange between the research groups. Located on the wetland-corridor-edge of the campus the building provides an engagement with this unique landscape.With Russell & Yelland ArchitectsThe plan is based upon two near parallel linear wings, in east-west orientation, that provide for modular flexible laboratory accommodation in one and for offices and support spaces in the other. The laboratories, offices, and open-office spaces share direct visibility and access, and the interlinking space has been designed to promote the benefits of cross-disciplinary informal interaction. JCU identified a need to upgrade its Townsville Campus to provide improved student services and to support contemporary methods of teaching and learning. In so doing, it had the opportunity to create an environment that better reflected JCU’s tropical identity, and to build a stronger sense of community among the staff and students. The rock formations are considered to be the exposed eroded remains of a formally thick bed of Tamala Limestone, which was formed over time with the combination of windblown sand and rain.  The configuration of the walls creates open-ended opportunities for enclosure, rather than clear-cut pockets of space, and material elements both fragment and overlap to emphasize the shifting focal points. Tonkin Zulaikha Greer Architects designed the Centenary Theatre to delivers a unique and engaging learning experience, positively influencing visitors with increased personal and emotional connection to the animals and the work of Taronga Zoo. Commissioned to acknowledge and celebrate the one hundredth anniversary of the Zoo, the Centenary Theatre promotes the significant and broad ranging work of the Taronga Conservation Society Australia.

The 160-seat capacity theatre was conceived as a building in the round, prominent from all sides. The softly-rounded, timber-clad form has a wide overhanging roof that follows the site contours. Robust public spaces blur perceptions of indoors and outdoors, offering visitors some of the zoo’s most iconic views. 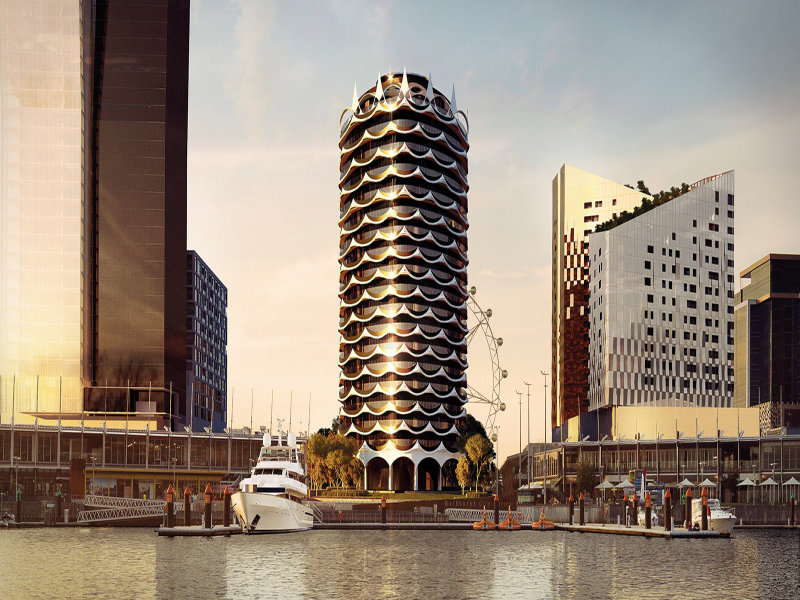 Banksia is a new building located on the northern waterfront of the docklands. The project presented the opportunity for a design that acted as a clear gateway on the waterfront and an important axial termination to the new public park.

In essence, the project offered a series of complex urban relationships which the architecture could respond to, many of which are rarely encountered within Melbourne. MCR developed Banksia in a new parkland which was worked in collaboration with Aspect Studios and Stutterheim Anderson Landscape Architecture. The City West Learning Centre for the University of South Australia incorporates a full range of active teaching and learning spaces, library services, and staff and student services in a single building strategically located within the City West campus precinct.

The building demonstrates the University’s commitment to creating spaces that are responsive to a parallel shift of the student environment to virtual space. On Hindley Street a self-shading transparent facade will create a new address for the University that brings the students to the foreground and glows into the evening as they study. The Lowy Cancer Research Centre is a joint venture between the University of NSW Faculty of Medicine (FoM) and Children’s Cancer Institute Australia (CCIA), bringing together childhood and adult cancer research on the one site. The design for the building evolved out of the competition scheme by Lahznimmo Architects and Wilson Architects.

The completed facility is 183,000 square feet with a construction cost of $100 million, and accommodates more than 400 researchers and support staff over eight levels. The facilities included in the building include: PC2 microbiological research laboratories; shared support laboratories including imaging and cancer genetics; animal research; administrative services and shared common interaction areas. GHD Woodhead designed a new carbon-neutral function center and administrative headquarters for Southern Metropolitan Cemeteries Trust, a major metropolitan cemeteries trust in Melbourne, Australia. Situated in the heart of Springvale Botanical Cemetery, the Clarence Reardon Centre was designed to sit in harmony with its botanical context. The mass of the upper floor is clad in highly-reflective double-glazing, allowing it to not only perform in the harsh Australian climate, but also cloak itself in the imagery of its natural setting rather than compete with it. The building’s long, smooth form catches and continues the colors and shapes of the surrounding sky and tree canopies, shifting and changing as time passes and weather turns. The new Highgate Primary School Teaching Classrooms are made to immerse the students in a creative environment that is anchored in to the surrounding context, creating new relationships and ways of seeing. The building offers a variety of scales of experience from distant views to intimate classroom experiences. Light, color and pattern is developed as an educational tool extending the classroom curriculum in to the built environment. The building is a microcosm of the city responding to the diverse and multi-cultural students, allowing occupants to find a place and space of preference. The new Tanderrum Pedestrian Bridge linking Birrarung Marr with the Melbourne Park sports precinct creates a major new arrival address for Melbourne Park. In the design, the team made a connection between the historic landscape of Speakers Corner and the outside tennis courts of Melbourne Park across Batman Avenue. The bridge design is slender, a flat steel girder structure that tapers at its edges to achieve the required span across Batman Avenue. The bridge undercroft follows the slope of the existing landscape thus eliminating low forming spaces and settles the bridge into the landscape. The lightweight filigree character of the steel structure provides the framework for a journey which branches into a connective path to Middle Terrace and provides views through toward the Yarra River, Birrarung Marr and the city.