The square in Florence

The square is one of the indispensable entities to form the city. It is associated with other marketing factors such as architecture, transportation, landscape and plays an important role in community life.

From the 6th century BC, the first concept of a square appeared in Athens with the name Agora (Agora in ancient Greek is a difficult word to find equivalent meanings in modern languages, it implies only meeting focus). Agora is a public area usually located in the center of the city with its roads and buildings facing it. By the time of Rome, the square called the forum continued to act as a gathering place, where important cultural and political activities took place. The square from the first foundations has been considered a symbol of democracy, where people are free to gather and express their views. In the Renaissance, the piazza (Italian) square was particularly interested in urban design with the aesthetic attention that the human element was centered on. Florence, a city in central Italy, covers an area of ​​102 square kilometers, about the same size as Hoi An. The number of plazas is staggering and their historical and cultural role is equally remarkable. 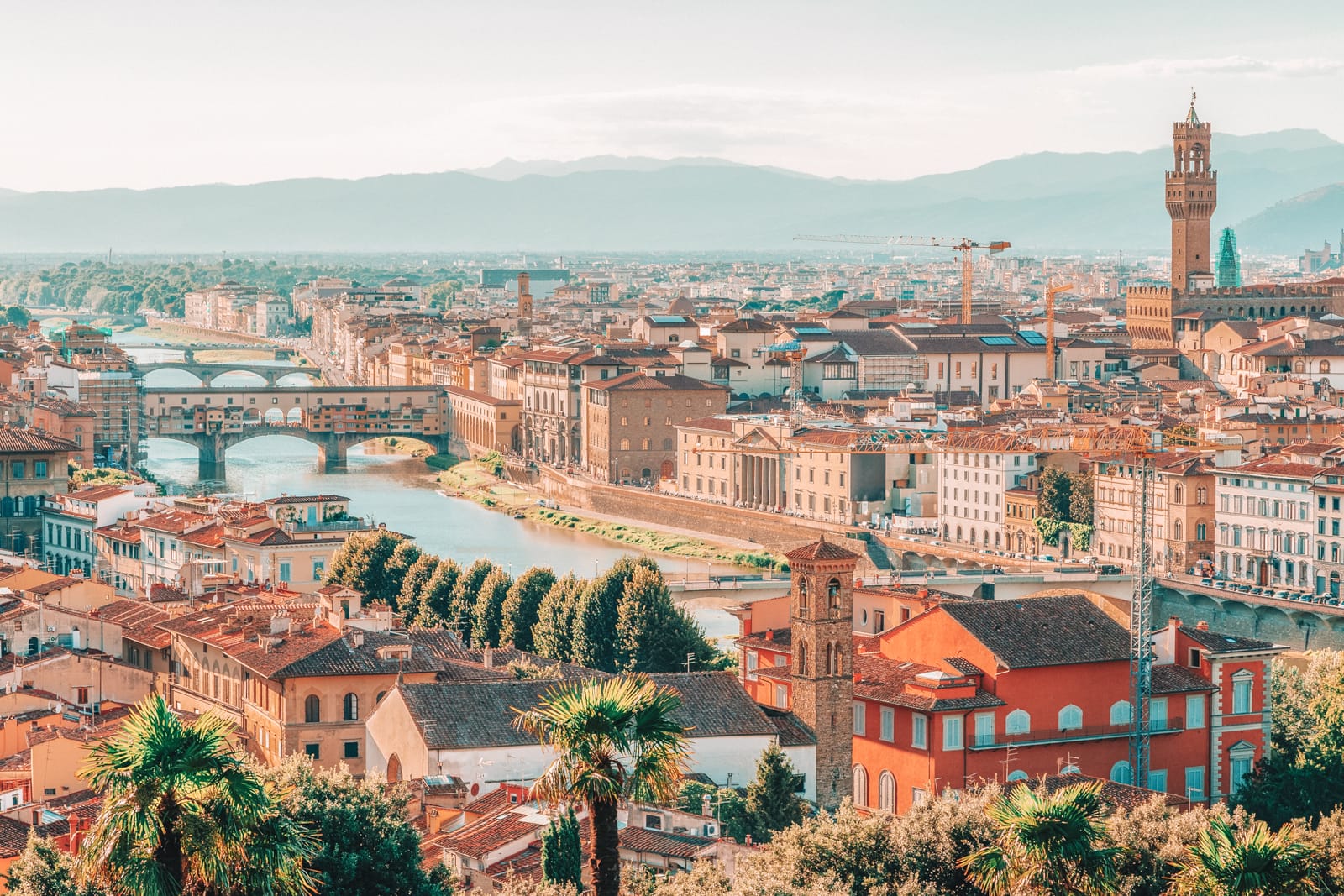 Florence’s Italian name is Firenze, Latin Florentia, is the city in central Italy, capital of Toscana, about 230km northwest of Rome. Florence was the capital of Italy between 1865 and 1870. The city has a long history rich in cultural traditions, most of the time as a republic state under the rule of the Duke of Toscana. . Between the 14th and 16th centuries, Florence was the commercial, academic and artistic capital of Europe. Originally a Roman city, Florence like many other European cities is designed with a grid of checkerboard roads. The intersection of major roads is believed to house the Greek gods’ temples, precursors of later squares. Temples were gradually replaced by Catholic churches in the 4th and 5th centuries. Along with that were the appearance of government buildings, markets, shops, and surrounding houses. The Renaissance was the glorious period of the squares in Florence, each born square has its certain role. The squares in Florence are large and small with different functions, magnificent or modest, famous or little known. But the common point of all these squares is their role in civil society and the importance of symbolism cannot be replaced.

The first important square to mention in Florence is the Republica square (piazza della repubblica). The square used to be a forum, the center of a Roman city. The high pillar in the middle of the square called Colonna della Dovizia marks the intersection of two major roads from this period. During the medieval period, this central area was a busy place with a large concentration of residents, gathering guilds, markets interspersed with makeshift quarters and churches. The square retained its characteristic medieval architecture until the 18th century when the council decided to expand the city and clean up the area. The towers, churches, factories, houses, and seats of the guild were all destroyed, making the public today regret. The square today has the shape of a large square surrounded by the same design buildings used as shops, cafes and hotels. The square area is also seen as an outdoor theater by street artists and an open-air exhibition for impromptu works. Although the current appearance of the square was the result of urbanization in the 19th century, the period when Florence became the first Italian capital to unify, the piazza della repubblica itself with little meager remains. evoke nostalgia and reminders of ancient Roman memories.

Next, and equally important, must mention the Signoria square (Piazza della Signoria). L-shaped square, located in a beautiful location, surrounded by historic buildings such as Vecchio palace, Uffizi gallery, Uguccioni palace and on the road towards the famous old bridge Ponte Vechio. Occupying the center of the square, Vecchino castle has a solid appearance of a fortress with bare stone walls, roofs with serrated balustrades, round rows of rolling doors, and tall towers set aside. images of medieval architecture remain. Politically, Piazza della Signoria has a special role in the formation and development history of the Republic of Florence. The square is named after the Palazzo della Signoria, also known as the Palazzo Vecchio, the government workplace (Signoria). Today, Signoria Square is like a huge outdoor sculpture gallery where statues imbued with the spirit of revival appear impressive, vividly charismatic. These include the water fountain with Neptune in the center, Hercules and Cacus, the bronze statue of Perseus and Medusa, the rape of Sabine Women in Greek mythology, the statue of David … Each statue has a story. behind it, on crime, killing, rape, faith, love, victory … Although borrowed from Greek mythology, the statues depict all the cravings of worldly life. Florence knows very well. Both Hercules and David were placed before the Palazzo della Signoria as a symbol of freedom and victory, as well as challenging symbols for the political rivals that plotted to take over the Republic of Florence.

Playing a key role in Florence political life and being a major patron of Renaissance art, the Medici family name is associated with the city’s popularity. Many relics of the life of this powerful family remain in the palace (Palazzo) Pitti. Right in front of the palace is the arc-opening space of Piazza de Pitti, located south of the Arno River and not far from the Ponte Vecchio Bridge. From the square you can admire the entire front of the Pitti palace, a three-storey structure spread out in horizontal rows of bare stone. On the ground floor, doors and windows are interlaced, while on the upper two floors, there are only uniform arch windows. Pitti Palace was bought by the Medici family in 1458 and used until the late 18th century. Today, the palace is a complex museum complex with many large and small galleries. The Medici family were originally merchants in the banking sector. They were one of the first businesses to use general ledger to keep track of loans and debits. As the owner of Medici bank, one of the biggest banks in Europe at that time, along with a series of other businesses, the Medici family used their strong economic potential to gradually step into the political arena. . Once in power, the Medici constantly strengthened their central role by connecting with other elite clans through marriages and trade deals. During his golden age, the Medici gave birth to three popes for the Roman Catholic Church — Pope Leo X (1513–1521), Pope Clement VII (1523–1534), Pope Leo XI (1605) and the two queen regents of France are Catherine de ‘Medici (1547–1559) and Marie de’ Medici (1600–1610). During his reign, the Medici created an environment conducive to the development of arts and humanism. Together with other large clans, they inspired the Renaissance.

Duomo Square (Piazza del Duomo) is the busiest area attracting the most tourists in Florence. In the center of the square is the cathedral of Florence (Cattedrale di Santa Maria del Fiore or Duomo di Firenze). The church was built in 1296 in Gothic style but was not completed until 1436 with a huge dome added, this is the design of Filippo Brunelleschi. Adjacent to the basilica is Giotto Tower with a decorative motif of the facade. Opposite the basilica is the Baptism of St. John. One of the oldest structures in Florence, the building has an octagonal structure designed in the Roman Florentine style. The influence of this style forms the basis for the master architects of the next generation to create Renaissance architectural style. The building is also famous for its three intricately carved frieze doors. The complex of the three mentioned buildings is an important heritage complex and a leading symbol of the city. Along with the long lines of visitors, Duomo Square is also home to many shops, eateries, outdoor cafes, street artists that operate freely and adorn by regular horse-drawn carriages. again.

Santissima Annunziata Square (Piazza della Santissima Annunziata) is another work of Brunelleschi, before he was famous for the Duomo dome. Although very close to the bustling Duomo square, Santissima Annuziata square is extremely quiet, probably thanks to its closed position. The square is surrounded by three rows of large corridors covered with arcades, the north is Santissima Annunziata church. The church is famous for its frescoes and lavishly decorated interiors. The most famous painting, the Miraculous Annuciation, is said to have happened when angels appeared to complete the painting while the artists overslept. Right in the middle of the square is a bronze statue depicting Ferdinando I de ’Medici on a saddle, facing the Duomo basilica. Also on the square are two fountains depicting the mythological monsters. Although once considered one of Florence’s most beautiful squares, Santissima Annunziata at first glance looks old. History and peace seem to be the most attractive point in this square.

Most of the image of Florence appearing on postcards was taken from a viewpoint in Michelangelo Square on a hill of the same name. This location is like a giant terrace that gives visitors a sweeping view of the city center where the Duomo dome is at the center of a landmark, a classic symbol, surrounded by towers. another church, brown-walled brick houses, the winding Arno river flows at the foot of small bridges, distant green hills and very close forests still mark the remains of the almost finished wall. disappeared during city expansion. The square was built in 1869 during the time when Florence became the capital of Italy and the city was involved in urban renovation. The original idea of ​​the square, designed by architect Giuseppe Poggi, included a large museum honoring the works of Michalengelo. However, the Museum was not implemented as intended. Instead, the square has a simple design with large space, a bronze sculpture is a replica of the statue of David of Michalengelo occupying the central position. Walk up the hill along the steps from Michalengelo Square and you will meet the monastery complex and the San Miniato al Monte church, a medieval architecture heritage dating back to the 11th century with a façade adorned with textures. learn green white marble with yellow mosaic. Unlike busy squares with tourists, the monastery area is always quiet, sacred and discreet. Just below Michalengelo Square, follow the stone steps we will walk through the rose garden. This is a free, open garden, filled with roses and other greenery.

Experiencing many urban renovation and renovation, Florence is still associated with the name of Renaissance city. During the 14th to 16th centuries, the Renaissance marked a revolution in square design. The square in this period is closely linked with urban planning and design, focusing on the ratio of people to surrounding buildings, combining the public service system with the rest space, stimulating interaction. among the townspeople. Whether a visitor arrives or a longtime resident, it seems that nowhere else in the plaza gives people the clearest impression that their presence is part of the city’s operation.